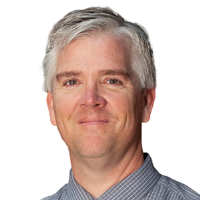 In 2020 and 2021, housing boomed and rates plummeted at a pace that many considered to be unsustainable. 2022's role is to take things back in the other direction.

In other words, things are "normalizing" after a period of frenzied movement.  The normalization process can seem scary in cases where the thing being normalized was exceptionally big, different, and fast.  It's safe to say that housing demand, home prices and rates were all moving in a manner that could easily be described as big, different, and fast.

As we watch the normalization process unfold, it's fair to wonder if it's a sign of more dire developments.  After all, mortgage rates skyrocketed well into the 6% range last week as markets braced for impact from the Fed's policy announcement.  At the time, we were hopeful that we'd just seen the highest rates of the year.  This week only added to those hopes.

If you happened to see other news this week that suggested HIGHER mortgage rates, rest assured, that news is dated.  Even if it had a release date as recent as June 23rd, it almost certainly draws on Freddie Mac's weekly mortgage rate survey which tends to capture rate movement at the beginning of the week only to report it on Thursday morning.

When we examine actual daily averages, we can see that Tuesday's rates weren't very different from last Friday's, but the following two days saw huge improvements before pulling back just slightly on Friday. 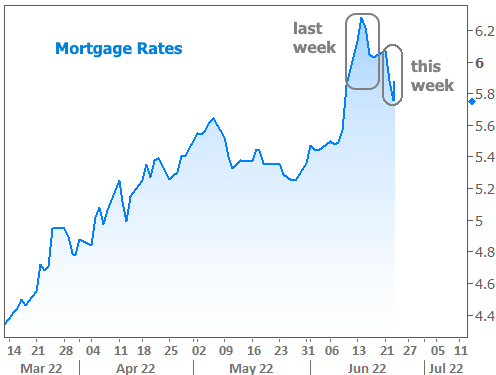 The larger-than-normal size of the improvements has to do with the way mortgage rates are determined.  This is a complex topic, so feel free to skip the next two paragraphs if you don't care about the "WHY."

Mortgages essentially turn into bonds, and those bonds dictate the rates lenders can offer.  Mortgages can only be placed into certain bonds, depending on the rates of the underlying loans. One of these bonds, for instance, can take loans with rates of 5.25% to 6.125%.  That means the value of a 6.25% loan would be determined by the next higher bond.  If investors place a premium on the lower bond (as they might in an environment where there's some hope that rates have topped out), a lender can actually make more money selling a 6.125% loan than a 6.25% loan.

This is the sort of thing happening on many lenders' rate sheets right now, and it means that it only takes a moderate improvement in the bond market for a lender to be able to offer a significantly lower rate.  In some cases, this could involve a borrower paying points, but if you've been averse to that idea in the past, just be aware that now is one of the most logical times to at least see how much lower a point could bring your rate quote.

In more stable times, 1 point is usually good for a reduction of 0.25% in rate.  Right now, however, it's common to see a 0.50% drop, assuming the starting point was 6.25% or higher.  By this same rationale, if the mortgage bond market improves by 1 point during more normal times, rate quotes would drop 0.25%, but right now, that same market improvement can result in a 0.50% drop.

From here, we can continue holding out hope that last week represented the peak fear when it comes to inflation and the Fed's policy response.  Unless some new narrative takes hold, that peak should align with a peak in interest rates.  But as we noted last week, this only remains true to the extent that economic data confirms inflation is leveling off.

Several economic reports contributed to that notion this week with the most notable being a drop in consumer inflation expectations on Friday.  Before that data from purchasing managers showed decelerating prices and slower growth (both good for rates).

In terms of housing-specific data this week, it was a mixed bag.  The biggest surprise came on Friday in the New Home Sales data. Not only was the previous month (April) revised higher, but the newly reported month (May) crushed expectations.  The median forecast among economists called for an annual pace of 588k, but the actual number came in at 696k.  Between the revision and the jump in the current data, the new home sales look like they're in less of a "volatile reversal" and more of a "gradual leveling off."  One might even call it a normalization... 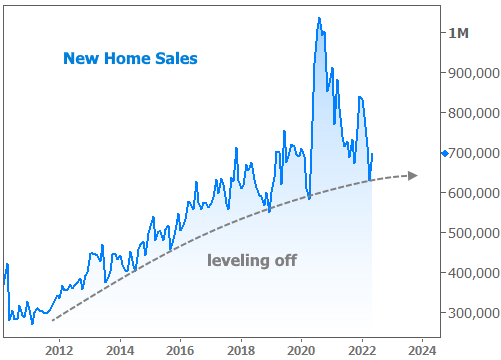 New homes are only a fraction of the market compared to existing homes.  Earlier in the week, the National Association of Realtors (NAR) release May's existing home sales data.  While it was sharply lower versus April, this drop was almost perfectly in line with forecasts.   Feel free to call this a volatile reversal if you like, but one that merely restores existing home sales to what were considered to be strong levels before covid. 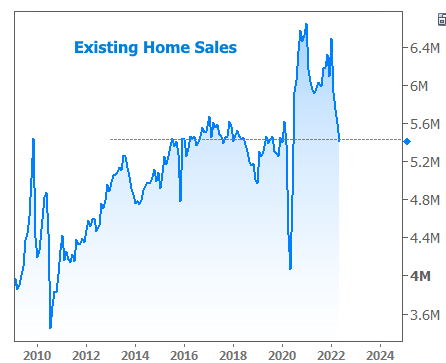