This week's 6.4% reading on Q1 GDP reinforced the notion of a strong economic recovery. In turn, the recovery helps to justify the sharp move higher in rates seen during the same 3 months. Rates managed to recover quite a bit in April, but ended up rising slightly this week, by some measures. Is the intermission over?

The following charts offer several ways to look at the intermission (basically April's push back against the previous 3 months of significantly higher rates).  Mortgage rates have outperformed other parts of the bond market even though they remain highly stratified by loan type and investor.  As such, the intermission looks healthy at first glance. 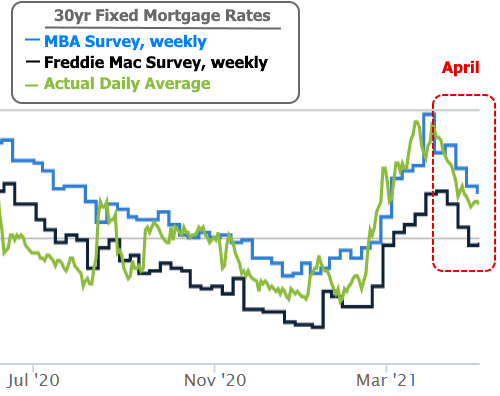 The 10yr Treasury yield (the quintessential benchmark of broad longer-term rate momentum) does a better job of showing this week's modest upward drift after bouncing several times at 1.53%. 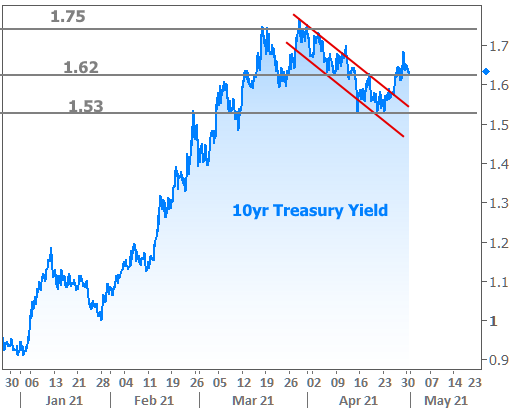 If we zoom out, we can see that April's consolidation/correction takes place exactly where we'd hoped based on previous discussions of "the hitch" zone.  In general, this means that rates had risen enough to justify taking a break. 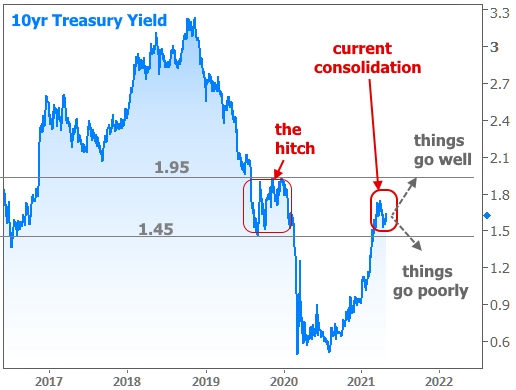 The hitch also serves as a reminder about how much more ground rates could cover (or recover) if things go very well (or poorly) for covid and the economy.  Indeed, that's what it's all about--a fact that was reiterated yet again in this week's press conference following the Federal Reserve's policy announcement.

Fed announcement days have a track record as being some of the best (or worst) days for mortgage rates. That said, they can be completely meaningless as well, and that's the designation we'd pick for this week's version (if we could only pick one).

Is it true that the Fed kept "rates" unchanged at 0-0.25%? Yes, but it's important to understand that refers to the Fed Funds Rate--a target rate for overnight lending between big banks. Mortgage rates can loosely correlate with the Fed Funds Rate over very long time horizons, but they frequently move in the opposite direction. More importantly mortgage rates are constantly moving whereas the Fed Funds rate hasn't changed in more than a year now (and is only usually capable of changing once every 6 weeks, outside of extraordinary circumstances).

So why do mortgage rates have a history of big reactions to the Fed if the Fed Funds Rate doesn't have much of a bearing on mortgage rates?

Simply put: the Fed does "other stuff" besides announce the Fed Funds Rate. That's just the piece of the announcement that news outlets tend to lead with. Mortgage rates are far more interested in the Fed's bond buying programs, which include $40 billion per month in new mortgage bond purchases (in addition to reinvestments of proceeds from past mortgage bond purchases). On that topic, the Fed held steady and indicated we're still a long way from a situation where bond purchases would be tapered.

Some market participants have wondered why the Fed continues to buy the same amount of mortgage-backed bonds in light of the blistering pace of home price appreciation.  Case in point, Tuesday brought another month's worth of home price data from Case Shiller and the FHFA. 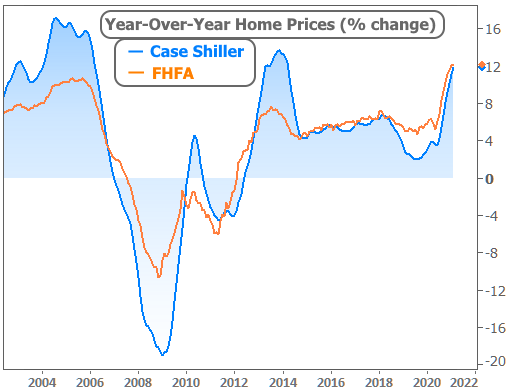 While the Fed offers unequivocal support in the present, traders continue worrying about the future.  It's easy to imagine a scenario where the economy has healed enough for the Fed to start dialing back.  When that happens, it could be the catalyst for rates to officially break out of the 'intermission' trend and resume their upward march.

In this week's other housing-related data, Pending Home Sales (the timeliest of the home sales reports) avoided losing any more ground after a 4 month slide.  Realtors rightfully point out that a lack of inventory is the biggest detractor to what would otherwise be record numbers. 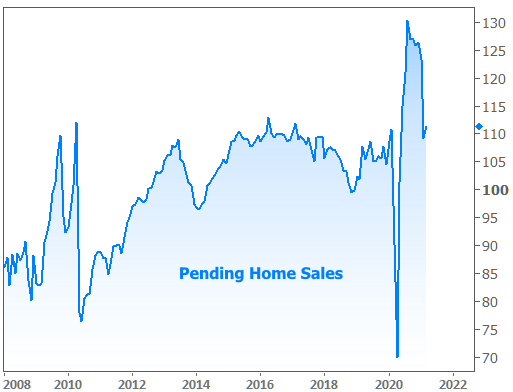 Next week brings a slew of big-ticket economic data that could further inform the recovery narrative, including the big monthly jobs report on Friday.  If the new numbers are as strong as they were last time, it would bring the Fed one step closer to actually having that discussion about tapering.  Rates probably wouldn't love that.  Stay tuned...